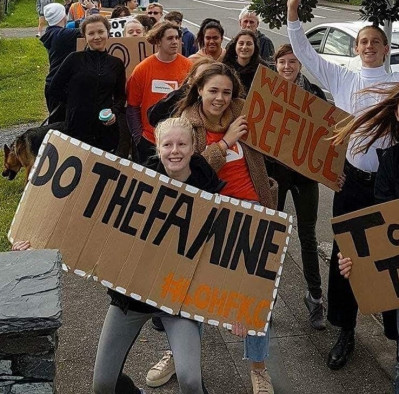 Sophie Handford
Sophie Handford was just 18 years of age when she was elected as the Paekākāriki-Raumati ward councillor, making her one of the youngest elected officials in the country. Her vocal campaign, which centred on environmental action and community well-being, reflects a long-standing interest and involvement in the Kāpiti community as a volunteer.

Desire to make a difference
"I wanted to give my time to something meaningful, so I decided that volunteering was the way to go. I've always felt that if I have time and energy to give, and if I can make a positive difference in someone else's life, I would really love to do that," says Sophie. She also says that volunteering has helped her develop better relationships and learn to work alongside a diverse range of people. "I find it a great way for people to connect across cultures and across generations'.

A modest start
Sophie got her first volunteer role through Volunteer Kāpiti doing Christmas wrapping as a fund-raiser at the local mall. "I was about 15 years old. My friend and I did it together – it was a great experience because we both enjoyed it and could share what we were doing while creating a little bit of good. It also helped ease any worries we had in the beginning. I've done it again every year since," she says.

Among other things, Sophie coordinates the School Strike 4 Climate environmental group, mentors a ten-year-old a couple times a week, works with Youth Wellington, and has a leadership role with the United Nation's Girl Up movement.

Volunteers, please stand up
Sophie has a message for anyone contemplating taking on a volunteer role. "Definitely do it - 100% do it. Maybe start small though and don't commit yourself to 10 or 20 hours per week right away. Start with something small, maybe 1 or 2 hours per week or even once a month. See how you like it, how it factors it in around your other commitments, and just keep building on that base," she says.
"Think about what kind of difference you want to make too, whether it's in relation to the environment, animals, or people, and so on, or if you just want to help out. Talk to a group like Volunteer Kāpiti and see what they can do."
"Volunteering is a great antidote when I feel overwhelmed about what we're doing to the environment or the state of humanity. It restores a little bit of hope, especially when I see other people volunteering alongside me and I realise that there are other people who care and who want to make a difference too."