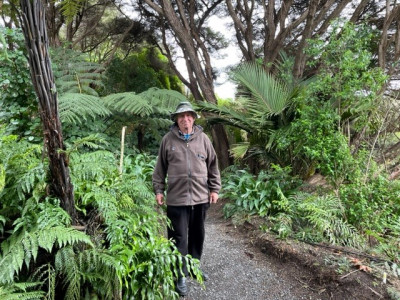 Bruce has been associated with native bush all my life, in his words he was ‘kind of born into it’, with his father carrying him on his back into the bush in the Northern Tararua Ranges behind Tokomaru and Shannon when he was only 6 weeks old. The bush there was named after his father, the De Cleene’s bush and Tararua State Forest Park was his playground as a child.

So, on the several occasions that Bruce visited Ngā Manu throughout his life the place itself and Ngā Manu’s objective ‘to conserve and preserve native fauna and flora and connect people with nature through education’ resonated strongly with him. A particularly memorable visit was with 3 generations of his family, when a Ngā Manu Ranger introduced them to a Tuatara as part of a close encounter experience.

After retiring Bruce was looking for something to contribute his time to in a meaningful way. The educational cornerstone of Ngā Manu’s mantra particularly appealed to him because in his view, the value of this learning for the whole population could never be overstated.

Therefore, Bruce moved to Waikanae from Whanganui specifically to work at Ngā Manu and has been living in a house bus in the area since June 2020.

Since joining Ngā Manu as a volunteer, Bruce has dedicated approximately 25 hours a week or 2,500 hours across 2 years to doing virtually anything to do with the reserve grounds including clearing noxious weeds and blackberry, planting native plants, extending the range of native plants we are using, and re-establishing a native plant nursery that had been previously neglected.

One of Bruce’s biggest achievements as a volunteer has been the re-establishment of the showpiece fernery on Ngā Manu’s Fern Island. In Spring 2021 over 1000 ferns were planted encompassing 60 species of native NZ ferns, transforming the Island into a fern wonderland that is now accessible to wheelchairs and prams. While the fernery was led and designed by Bruce, he is quick to mention that he couldn’t have done it without the support of the wider Ngā Manu volunteer group and staff, who demonstrated a huge amount of enthusiasm for the project.

Other highlights for Bruce include working alongside Reserve Supervisor Rhys Mills on the native NZ Mistletoe rejuvenation project at Ngā Manu in which the pair have dedicated long hours to establishing five species of Mistletoe, an endangered semi-parasitic native NZ plant in danger of extinction. Bruce is so proud to be a part of this project, which is at the forefront of NZ’s native mistletoe rejuvenation.

We are all exceptionally grateful to Bruce for his contributions to Ngā Manu including his work on the reserve, fern island but also his enthusiasm and knowledge of native fauna and flora.

What makes the volunteer or team of volunteers special?

What makes Bruce a special volunteer? His passion and enthusiasm for what he does! He has dedicated 25 hours a week to Ngā Manu for the past 2 years, and he gives so much to the reserve every time he is here. He is so enthusiastic about what we do here from a conservation and preservation perspective, but also the education focus at Ngā Manu. He sees opportunities to improve what we do and what we offer to our community e.g. Fern Island, and sets his mind to creating something magnificent with his time.