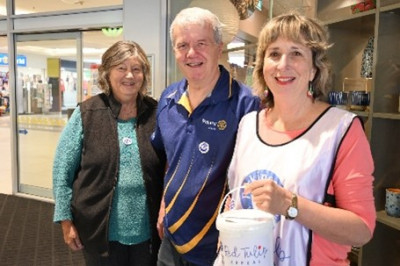 In April 2021, the small group of Parkinson's volunteers mobilised people all over the Kāpiti Coast and Horowhenua to spend a few hours collecting in public places in support of Parkinson's NZ. Organising a street appeal is no easy feat, and many hours were spent by this amazing group doing so.
On the day they were blessed with great weather in Kāpiti and Horowhenua and our collectors did a great job representing us. There have been some doubts about the impact of the RSA's poppy day on our Parkinson's NZ April collection, but this group was one of the only regions across NZ that grew donations when compared with the recent past - $6,000 was raised in one day. There was also media coverage in the local newspaper, written and organised by the volunteers.

Our Action Group worked hard to ensure the Parkinson's community was well represented to raise awareness of Parkinson's within the public arena. Kevin Ramshaw, Kāpiti and Horowhenua Action Group chairperson said "It's also important to be mindful that it isn't entirely about collecting money. We had many, many good conversations with the institutional groups - like Lions, Rotary, Menzshed, Kāpiti Songsters, and Inner Wheel - who helped us collect as well as members of the public when they donated. Those conversations go a long way to raising awareness of Parkinson's in the community".

The team was tired but proud of what we had achieved after a long day collecting. Over a celebratory fish and chip dinner another volunteer, Prue Haddock, said about the day: "this was by far the most pleasant street day collection I have been involved in, and also the most positive and rewarding experience in my 9 years on the Parkinson’s committee/action group. Thanks everyone in team Kāpiti and Horowhenua".

There was little rest for this amazing team after the above street appeal. They quickly regrouped and worked together to host a wonderful social event for those living with Parkinson's. They organised for a guest speaker from Auckland to come and talk about her novel written about characters with Parkinson's. The volunteers also arranged for our guest speaker to be interviewed on Coast Access Radio, further raising awareness of Parkinson’s within the public. It was a lovely social evening hosted in the Mahara Gallery, Waikanae, with our wonderful Parkinson's volunteers catering for the event themselves, and running a raffle. Forty people attended and many said how much they learnt and how they were inspired by the guest speakers message of hope.